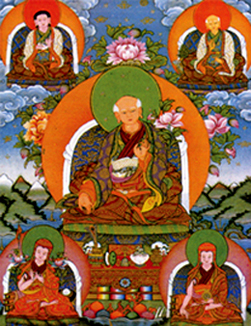 The History of Sakya begins with a race of celestial beings having descended from the Clear Light heavens in the Realm of Form to take up residence in the snow mountains of Tibet for the benefit of living beings. This was ten generations before the arrival of Guru Padmasambhava. At this time they were known as Lha Rig. After eight generations, due to a dispute with a Yaksha leader, the Lha Rig also became known as the Khon which means ‘dispute’ or ‘strife.’ In 750 A.D. the Khon family became students of Guru Rinpoche Padmasambhava receiving especially the Vajrakila empowerment. A Khon son received novice monk ordination from Shantirakshita at Samye, becoming one of the first seven monk translators in all of Tibet. For the next thirteen generations (750-1073), the Khon family was a central pillar of the Nyingmapa School in Tsang Province .

In the eleventh century, due to the obscurations of beings, Dharma practice became very lax in Tsang. It was decided by the head of the family, Sherab Tsultrim, that it was time to seek out the new Tantras from India . Guru Padmasambhava wrote; “an emanation of the Indian Virupa – Drogmi Lotsawa will appear.” The younger brother, Konchog Gyalpo, went to study with Drogmi Lotsawa (992-1074). At an auspicious location, below a white patch of earth (sa-skya), prophesied by Guru Padmasambhava and Lord Atisha, Khon Konchog Gyalpo built the first temple named the Gorum Zimci Karpo in 1073. This marks the beginning of the name “Sakya.” The holy family, the hereditary leaders of this precious lineage, are known by these three names, Lha Rig, Khon and Sakya.”

Sachen Kunga Nyingpo (1092-1158), the son of Khon Konchog Gyalpo, was a person of extraordinary skill and spiritual attainment, holding all the lineages of Sutra and Tantra. His main teachers were first his father from whom he received mainly the Vajrakilaya and Samputa Systems of practice. From Bari Lotsawa he recieved namely Chakrasamvara, Guhyasamaja, Vajra Bhairava and others; from Shangton Chobar, the entire Lamdre system over a period of four years along with the systems of Mahamaya and Samayogadakinijala. From Mal Lotsawa Lodro Drag he recieved the Chakrasamvara, Bhairava, the teachings of mahasiddha Naropa namely the Vajrayogini, and of significant importance the lineages of Panjarnatha Mahakala. From Lama Nam Ka’upa he received all the instructions, outer, inner and secret of the Four-faced Protector Caturmukha. These were only the main teachers of Sachen Kunga Nyingpo.

At the age of twelve while in a six month Manjushri retreat he had a vision of Manjushri accompanied by two bodhisattvas who spoke to him with the lines of the Separation From The Four Attachments;

Sachen Kunga Nyingpo received the Lamdre teaching first from Shangton Chobar and secondly directly from Virupa in a series of visions that lasted a month. This is known as the ‘recent’ or ‘close’ Lamdre lineage. Sachen had four sons – Kunga Bar, Sonam Tsemo, Jetsun Dakpa Gyaltsen and Palchen Rinpochey. The first died while studying at Nalanda in India . The second son Sonam Tsemo (1142-82) became a learned scholar at the early age of sixteen. At the age of forty-one he ascended bodily to Khecara, the divine realm of Vajra Yogini. He had visions of many meditational deities and also produced many realised disciples. Jetsun Dakpa Gyaltsen (1147-1216) received lay celibacy vows and showed strong signs of spiritual maturity in his youth. At the age of eleven he gave his first Hevajra teaching.

The main student of Jetsun Dakpa Gyaltsen was his nephew, son of Palchen of Opochey the famous Sakya Pandita Kunga Gyaltsen (1182-1251). Studying Buddhist and non-Buddhist philosophy, tantra, logic, Sanskrit, poetry, astrology and art with countless Indian, Nepalese, Kashmiri and Tibetan masters, he achieved mastery over all these subjects. When twenty-seven years old, after meeting with the Kashmiri Pandita Shakya Shribhadra, he became a fully ordained monk and maintained his vows without the least infraction. His works such as the Treasury of Logic on Valid Cognition (Tsad-ma rigs-gter) and the Discrimination of the Three Vows (sDom-gsum rab-dbye) are famous to this day. In all he wrote 114 religious treatises. The Treasury of Logic on Valid Cognition (Tsad-ma rigs-gter) was the only text of Tibetan origin ever to have been translated into the Sanskrit language. The translation was rendered by his Indian students at Nalanda University in Magadha , and was received with much acclaim. “At the time of his mahaparinirvana, the earth shook six times and birds throughout the kingdom cried in lament. Wondrous signs were seen by the assembly of disciples and kings when the pyre was lit, and all who were present experienced blissful peace. Having attained perfect enlightenment by the grace of Manjunatha, he is known to the world as the Buddha Vimalasri.”

“With wide eyes perceiving all things, And compassionately achieving the good of all beings; Having power performing acts beyond thought. Guru Manjunatha, to your feet I bow my head.”

In 1244, Godan Khan, grandson of Chingis Khan, intrigued by Sakya Pandita’s reputation, invited him to Mongolia to give Buddhist teachings. Later, in 1253, after both Sakya Pandita and Godan Khan had passed away, the emperor, Sechen Kublai Khan invited Drogon Chogyal Phagpa. nephew of Sakya Pandita to his court. Phagpa invented a new script for the purpose of writing the Mongolian language. Kublai Khan was so impressed by Phagpa’s performance that he declared Buddhism the state religion of Mongolia and presented him the rulership of the three provinces of Tibet . Thus, Phagpa was the first person in Tibetan history to gain religious and secular authority over the entire country. It was at this time that the great temple Lhakang Chenmo was constructed at Sakya. To this day it still stands and houses the greatest religious library in Tibet , statues and religious objects of antiquity. Phagpa was succeeded by his brother Chagna and altogether the Sakyapas ruled Tibet for more than a hundred years.

Eventually, Tishri Kunglo (1299-1327), eldest of the fifteen grandsons of Sakya Pandita’s brother, founded four dynastic Palaces (Phodrang): Zhithog, Rinchen Gang, Lhakhang and Ducho of which only the last survives. In the eighteenth century at the time of Sakya Trizin Wangdu Nyingpo, the second Padmasambhava of this age, the Ducho Palace split into two – the Dolma Phodrang and Phuntsok Phodrang. The present heads of these two palaces are His Holiness Sakya Trizin Ngawang Kunga (b. 1945) of the Drolma Palace, the current head of the Sakya tradition, the 4lst holder of the Sakya Throne and living in Dehra Dun,India . His Holiness has two sons, Ratna Vajra and Gyana Vajra. He also has a sister, Jetsunma Chimey Luding, that teaches extensively throughout the world. Gongma Dagchen Rinpoche (b. 1929) of the Phuntsok Palace founded Sakya Thegchen Choling in Seattle, Wash. U.S.A. He had one brother, Gongma Thinley Rinpoche, a monk who past away recently. Dagchen Rinpoche also has five sons. The second son, Ananda Vajra Rinpoche, an accomplished lawyer, is assisting the Dalai Lama and the Tibetan refuge governmnet with legal and constitutional matters. Succession to the position of Sakya Trizin, head of the Sakya tradition, has been hereditary since the time of Khon Konchok Gyalpo and recently – alternates between the two palaces.

Amongst the principal holders of the Sakya tradition, Sachen Kunga Nyingpo, Sonam Tsemo, Dakpa Gyaltsen, Sakya Pandita Kunga Gyaltsen and Drogon Chogyal Phagpa are known as the Five Superiors of the Sakya tradition, Jetsun Gongma Nga. The first three are known as the Three White Ones and the last two as the Two Red Ones. After them there were the Six Ornaments of Tibet: Yakton Sangye Pal and Rongton Mawe Senge, who were famous for their knowledge of sutra teachings; Ngorchen Kunga Zangpo and Dzongpa Kunga Namgyal – learned in the tantras; Gorampa Sonam Senge and Shakya Chogden – learned in both sutras and tantras. These are the most important masters of the Sakya tradition. Amongst them, Gorampa Sonam Senge instituted the formal study of logic. 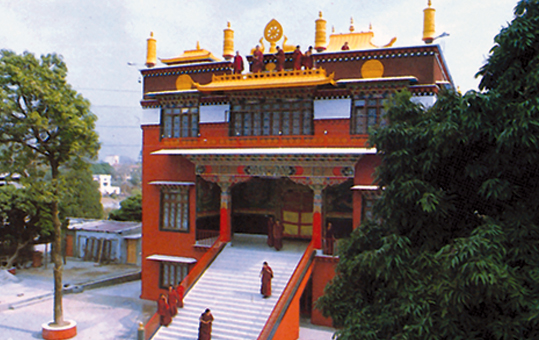 Tsechen Tenpai Gatsal Shedup Chokhorling (The Sakya Centre) in Rajpur (pictured above) is the main seat of the Sakya Order of Tibetan Buddhism and the personal monastery of His Holiness Sakya Trizin.

Like other traditions of Tibetan Buddhism, a number of branch lineages emerged. The lineages which strictly hold to the teachings of Sakya Pandita Kunga Gyaltsen are Sakya, Ngor and Tsar. Ngorchen Kunga Zangpo (1382-1457) and successive masters such as Konchok Lhundrup, Thartse Namkha Chime Palzang and Drubkhang Palden Dhondup founded the Ngor lineage. Tsarchen Losal Gyatso (1502-56), followed by Jamyang Khyentse Wangchuk and Mangtho Ludrup Gyatso founded the Tsar lineage. Three other traditions rooted in the Sakya lineage are the Bulug/Shalu founded by Buton Thamche Khyenpa, the Jonang founded by Dolpopa Sherab Gyaltsen and followed by Jonang Taranatha and the Bodong founded by Bodong Panchen Chogle Namgyal. The Dzongpa of Dzongpa Kunga Namgyal has also been treated as a separate lineage. “But among all these [Sakya] traditions, there are only a few minor differences which appear in their explanations and theories of Sutra and Tantra,” – Dzongsar Jamyang Khyentse Chokyi Lodro. Concerning the view, in Tibet, three interpretations of Madyamika have arisen; Nihilistic Madyamika, Eternalistic Madyamika (shan tong) and Middle-way Madyamika. The Sakyapa follow the Middle-way Madyamika as taught by Sakya Pandita and ellucidated by Gorampa Sonam Senge and others.

The heart of the Sakya Tradition is Lamdre (lam ‘bras), the Path and Its Result, one of the most comprehensive and systematically organized meditative systems of Tantric Buddhism. Originating with the Mahasiddha Virupa having received the Hevajra empowerments directly from Vajra Nairatmya the teaching has continued down through Indian Mahasiddhas and Tibetan translators to the great masters of the Sakya Tradition. At the time of Muchen Sempa Chenpo Konchok Gyaltsen, a disciple of Ngorchen Kunga Zangpo, lamdre was divided into two sub-traditions: the Explanation for Private Disciples – the uncommon teaching (sLob-bshad) and for Assemblies – the common teaching (Tshog-bshad) traditions. The philosophical viewpoint expressed in the Path and Its Result is the ‘Non-differentiation of Samsara and Nirvana’ and the ‘Inseparability of Clarity and Emptiness.’ According to this, an individual cannot attain nirvana (peace) by abandoning samsara (cyclic existence), because the mind is the root of both samsara and nirvana. When obscured, it takes the form of samsara and when freed of oscurations it is nirvana. Therefore, the reality is that a person must strive through meditation to realise their inseparability.

Within Sakya, of the hundreds of Indian Buddhist teachings assimilated into the religious life of Tibet through the efforts of the Five Founding Teachers the most famous were the Hevajra transmission originating with Virupa, the Vajrakila of Padmasambhava, the Vajrayogini of Naropa, the Mahakala of Vararuci and the Guhyasamaja of Nagarjuna. These five Indian Mahasiddhas are considered the most renowned in Sakya. Aside from these preeminent lineages there is the group of Four Tantras; Hevajra, Chakrasamvara, Guhyasamaja and Vajra Bhairava. Another important set is the Thirteen Golden Dharmas comprised of the Three Red Ones, the Three Great Red Ones, the Three Lesser Red Ones, Black Manjushri, Avalokiteshvara Simhanada, Sabala Garuda and Red Jambhala. There are several different versions of enumerating the 13, however the 3 sets of Three Red Ones have remained consistent. These are only the main Anuttarayoga tantric practices of Sakya, there are hundreds of other lineages of teachings such as Hayagriva, Kalacakra, Mahamaya, Manjushri, Vajrapani, Tara and the like.

>His Holiness the 41st Sakya Trizin