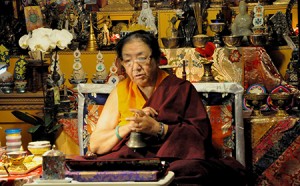 Her Eminence Sakya Jetsun Chimey Luding Rinpoche, the highest and most thoroughly trained female Buddhist teacher in the West, was born into the Drolma Podrang, or Tara Palace of the Sakya Khon family in 1938, the year of the earth tiger.

She began her dharma studies at the age of five. His Holiness Sakya Trizin was born when she was six years old. According to the tradition in her family, she took novice ordination when she was “old enough to scare crows away” at the age of seven. When she was ten years old, she made her first retreat. She meditated on the form of Vajrapani known as Bhutadamara, and in one month completed one million recitations of the short mantra, HUM VAJRA PHAT, and one hundred thousand recitations of the long mantra. In her eleventh year, her father, Kunga Rinchen, sent her on her first teaching assignment. She spent the fourth through the tenth Tibetan months among the nomads on the northern plains of Tibet, giving transmissions and teachings on Phowa, or transference of consciousness, as well as conducting torma offerings, performing lhasang, or incense offerings, and giving other teachings and empowerments.

The third woman in the history of Tibet to have transmitted the Lam Dre (the Path and Fruit) teachings, a fully accomplished guru and lineage holder, she is known for her teachings on Vajrayogini and is considered an emanation of that yidam of enlightened feminine energy. 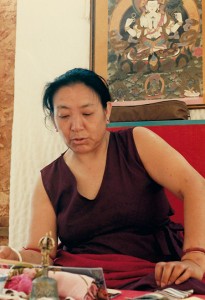 This was 1951, and it was here that she made one of the first of her well-known mos or divinations. There was a large monastery in the area where she was giving the teachings, and this was the time of political troubles surrounding the Radring regent. The abbot of the local monastery, Kardor Rinpoche, had sided with the Radring regent and for this he had been imprisoned by the Tibetan government. An earnest and worried delegation from this monastery requested an audience with the Sakya Jetsunma and asked her to do a mo to determine when their abbot would be released from prison. She made a divination with dice and recommended that the members of the monastery perform the four mandala puja of Green Tara, and recite the Twenty-One praises to Tara one hundred thousand times.

In 1952, during a visit to Lhasa when the Dalai Lama recognized and confirmed her brother as the Sakya Trizin, a group of monks requested an audience with her. They thanked her sincerely and profusely, and when she inquired the reason for this thanks, having forgotten about the incident and the mo, they told her that they had followed her instructions, and that their abbot had been released the day after they had completed the one hundred thousandth recitation of the Twenty-One Praises.

Her younger brother had died when she was four years old. Her mother died in 1948 when Jetsun was nine and His Holiness two. Their younger sister died in 1951 at age eight and their father died less than a month later, during an epidemic in Sakya. This meant that the teachings that would normally be conferred by their father would have to be offered by another guru. Their aunt took them to Ngor, where they received the Lamdre from the great Kangsar abbot, Ngawang Lodro Shenpen Nyingpo, Dampa Rinpoche. 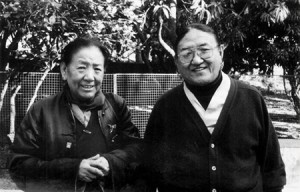 In 1952, following the Dalai Lama’s recognition of her brother as the Sakya Trizin, their original plan to take teaching from the great Jamyang Khyentse Chokyi Lodro in Kham had to be altered since His Holiness could not venture too far away from Sakya and his duties. Instead, they went again to the great abbot of Ngor, Dampa Rinpoche, who lived closer by, for the Lamdre Lobshe (the intimate transmission of the Path and its Fruition), teachings central to the Sakya lineage. Unfortunately, he died before he could complete this transmission, and that task was taken over by the Kangsar Shabdrung, Ngawang Lodro Tenzin Ngingpo. Jetsun relates that from the time the Dalai Lama conferred recognition on her brother, ” His Holiness and I were constantly in each other’s company, and wherever he went, I went and I was always with him.”

From this time on until they fled to India they received the same teachings and made the same retreats. At the same time that she and His Holiness received the Lamdre Lobshe transmissions from the Kangsar abbots, they also received lung or scriptural transmissions for the biography of Ngorchen Kunchok Lhundrup from the Ngor abbot of the Phende house, Phende Khenpo, Ngawang Khedrup Gyatso. This was 1953.

In 1954 they received the transmission of the Druptap Kuntu from the Khangsar Shabdrung, Ngawang Lodro Tenzin Nyingpo. (the Druptap Kuntu is a large collection of empowerments and sadhanas from all four classes of tantra, compiled in the 19th century by Jamyang KhyentseÃ•I Wangpo and his principle student, Jamyang Loter Wangpo). 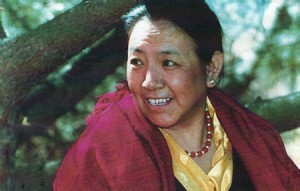 When Jetsunma was sixteen, she and His Holiness undertook the full retreat of Hevajra. Their teacher also went into retreat with them. Although they did the retreat in separate rooms, they kept contact through notes passed back and forth, and began on the same day and ended on the same day. They performed all the requisite recitations of the different Hevajra mantras, as well as the mantras of Nairatmya. They remained in this retreat for seven and a half months, and followed it with a one month retreat on Vajra Garuda, during which she recited the mantra one million, five hundred thousand times. When they had finished this retreat, Jetsun Kushok’s aunt requested her to do a seven-day retreat on Ling Gesar in order to develop her powers of divination by foreseeing the future in a mirror, and she completed this also. 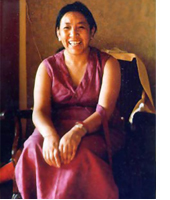 Soon after she left this retreat, in 1955, a crowd of monks from Kham arrived in Sakya, and requested the Lamdre teachings from His Holiness, who because of his own schedule was unable to accommodate them. Their aunt then urged Jetsun Kushok, who was then sixteen, to give the teaching herself. The Lamdre is a complete cycle which encompasses the full range of Buddhist teachings, from Hinayana through Mahayana and up to and including Vajrayana. It revolves around the central mandala or the Virupa transmission of Hevajra. Jetsun Kushok bestowed the short version of the Lamdre by Ngawang Chodruk, as well as the lung for all the various practices and ceremonies connected with the Sakya lineage. The whole teaching lasted around three months. Thus she became the third woman in Sakya history to have transmitted the Lamdre, and in 1956 when she and His Holiness went to Lhasa to receive the middle-length teaching on the Lam Rim from the Dalai Lama, she headed the procession, crowned with the Sakya hat worn by high Sakya lineage holders and proceeded by a golden umbrella.

It was also in 1956 that she and His Holiness received the full Nyingma transmissions of Long Chen Nying Tik from Jamyang Khyentse Chokyi Lodro, who was in Lhasa at that time. Jamyang Khyentse Chokyi Lodro came to Sakya later that year to give them the Chak Mey Nam Zhi, or the Four Uninterrupted Practices, which those who have received the full Lamdre teachings are supposed to practice on a daily basis. They are: 1)The Lam Dus Hevajra sadhana, 2) the Vajrayogini sadhana, 3) the Bir Sung or Virupa Protection meditation, and 4) the Lam Zap or Profound Path Guruyoga meditation. 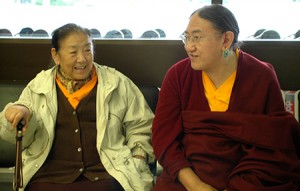 In early 1957, Jetsun Kushok, her brother, and entourage went to India on a pilgrimage at the same time as the Dalai Lam and Panchen Lama went to India. It was here that she fist conceived the idea of learning English in a Western-style school, but her teacher was scandalized and wouldn’t hear of it. In 1958, her brother was enthroned at Sakya as His Holiness the Sakya Trizin. Several months after that, after the obvious loss of Tibet to the Communist Chinese, Jetsun Kushok, His Holiness, their aunt, and a handful of attendants fled to India.

In India, Jetsun Kushok describes herself as being quite a tomboy. She studied the Nang Sum (the three visions) and the Dom Sum Rabye (the vows of Hinayana, Mahayana and Vajrayana) by Sakya Pandita. However, it became increasingly difficult for her live with the outer discipline of a nun in India without the support of monastic life. She found herself the object of ridicule and scorn because of her shaved head and robes, and after consulting the Dalai Lama and her brother, decided to give back her robes, although she continued in the inner deportment of a nun. 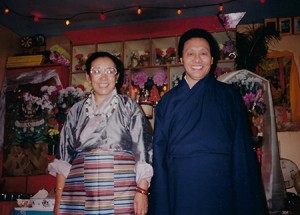 She began taking English lessons from a Christian missionary, and there met Luding Sey Kusho, who was the brother of Ngor Luding Khen. Since the Luding succession is a blood lineage, and the Luding family was an offshoot of the Sakya Khon family, her aunt and several older family attendants conceived of the plan that she should marry Sey Kushok. While she refused at first, she was convinced at last, since a male child of their union was needed to become the Luding Shabdrung. She was married to Rinchen Luding in 1964.

Their third child, a son born in 1967, was different from the others. Jetsun Kushok reports that he didn’t cry like the other children and that he would wake up and amuse himself by making mudras with his hands and mumbling to himself as though he were reciting texts. When he was three or four, he showed real interest in becoming a monk and took delight in being around ordained people. When there were religious ceremonies he would far prefer attending them than playing with other children. This was the child that became the Luding Shabdrung.

Leaving the four-year-old Shabdrung Rinpoche behind in the care of his uncles, H.E. Sakya Jetsun Rinpoche went with her husband and three young sons to Canada and settled on a farm as laborers in Taber, Alberta in 1971. In 1973 they came to Vancouver, British Columbia. They now live in Richmond, a suburb of Vancouver. 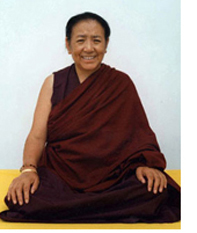 At first she did not teach at all, needing to care for her young family and earn a living. However, when His Holiness and Dezhung Rinpoche began teaching in New York, they were repeatedly asked about authentic, living, women lineage holders. They both requested her to begin teaching again. Since then she has founded a dharma center in Vancouver, Sakya Thubten Tsechen Ling, and another in Oakland , California, Sakya Dechen Ling. She visits the other member centers of Palden Sakya (the association of Sakya Dharma Centers in the United States ) in New York, Boston , Los Angeles, Minneapolis and Washington DC.  Jetsun Kushok has also taught in Singapore and Hawaii and currently bestows initiations and teachings throughout the U.S. and Europe.

Today, she has a special mandate to teach and provide a role model to all practitioners, but especially to women on the path.